Even though it has five letters, for most lenders fraud is a four letter word.  Usually the course of action when fraud is found is not to go running to the nearest prosecutor or law enforcement agency to have the perpetrators charged, but rather to call a meeting with the principals involved and to work out a reasonable way for the lender to walk away from the transaction with no loss or as small a loss as possible.  The threat of litigation and possible prosecution is usually enough to ensure the cooperation of the offending parties.  Of course, lenders will press charges when a fraud is so egregious that there is no way a lender will get paid back, if it causes harm to other parties, or if a lender feels they may have a better chance of collecting more if the offending parties are prosecuted.

This post will detail a fraud that ECG Collateral Services uncovered during an assignment for one of our clients.  It is not a fraud that you can read about in the press or on the web.  Of course the names omitted and some key facts have been changed to protect the innocent (namely ECG, we have a severe aversion to being sued!); however, the general methods used to perpetuate and identify the fraud remain intact.  This was a real situation that involved real money.  Transaction amounts used below  are the real numbers.

The borrower that committed the fraud was in the construction industry, installing flooring for large commercial projects.  Since the projects generally took at least several months (with some larger jobs taking years) the Company employed percentage of completion billings.  Previous examinations had noted that there was a tendency for the company to have billing percentages for particular jobs greater than the costs incurred to date.  Although this practice could certainly be considered “fraudulent” it was not the source of the fraud but was likely one of the causes of the fraud  (borrowing base ineligibles were recommended; however, they were not instituted by the lender probably because the Company demonstrated that eventually the “pre-billed” amounts were collected).

As we all know, the financial crises of 2008 was detrimental to many industries, but commercial building was probably one of the worst hit.  For this company (and many others) the impact of that crises was not immediately felt.  Since the Company had several large projects in process and contracts signed to start several additional projects when the crises hit, they were able to continue operating “status quo” for sometime.  However, as projects came to a close, and the flow of new contracts slowed considerably,  the Company’s cash flow was severely impacted.  As noted above, the prior practice of trying to frontload the invoicing as much as possible only added to the financial pressure felt by the dwindling construction activity and the resulting dwindling cash flow.

As cash flows slowed the company’s liquidity became more and more restricted.  Borrowings increased and soon the borrowing availability was exhausted.  Hind sight is always 20-20 but there were several warning signs that the lender probably could have picked up on to insist on an earlier audit.  These included:

The actual fraud, was about as simple as they come.  The Company started including “memo billings” in the AR collateral reported to the lender.  The memo billings were for jobs that the company did not yet have a signed contract for.  Of course the company expected to and “hoped to eventually” have signed contracts; however, the deals did not get done as quickly as hoped or expected and the ride down the slippery slope began.  These memo billings were then reversed the following week, this allowed the Company’s sales to be maintained in an accurate manner for financial reporting.  Of course the invoicing occurred at the end of the month while the reversal occurred the following week, after the AR aging had already been reported to the lender.  On average, 90% of invoices created on the last day of the month were reversed the following week.  In several instances the company would invoice for the hoped for contract, credit the invoice and then rebill these same hoped for contracts for several consecutive months.

A fraud of this type can be found or at least indicated with several audit processes normally preformed on an asset based audit including the shipping/invoice test, the credit memo review/test and the analytical review performed during the preparation of the AR statistics.  The Company was employing all sorts of delaying tactics in providing the requested documents for the transactions tests, so the way the examiner identified this particular fraud was during the calculation of the AR statistics; specifically the identification of dilutive and non-dilutive credits by reviewing the billing detailed data file.

The Devil is in the Details……..

The examiner originally received a sales ledger with the following entries: (customer names have been removed) 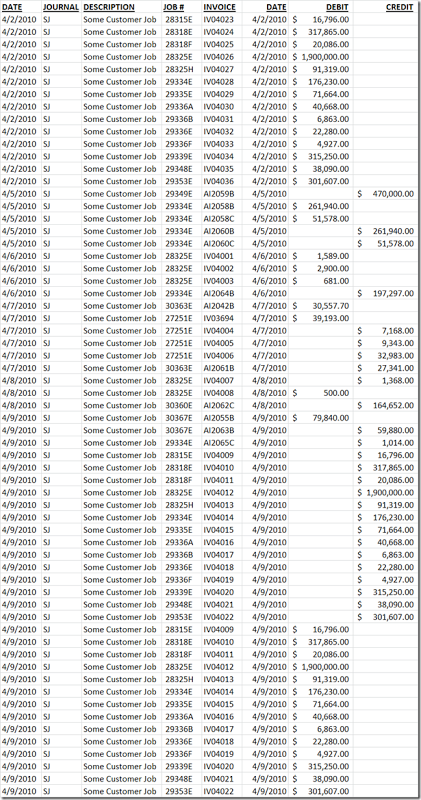 At first glance, there is nothing that unusual about the above.  There are a large number of credit items, but as noted previously dilution was always historically high and the Company, due to the industry incurred many change orders that required items previously billed to be corrected or credited and rebilled.  A large number of credit items were not that unusual for this particular borrower.

Knowing that the AR was reported monthly, the examiner wanted to determine the credits that were issued within the same month as an invoice and credits that were issued in subsequent months.  This was needed to determine non dilutive credits (i.e. credits issued the same month as the invoice) versus dilutive credits (credits issued in a month subsequent to an invoice).  To assist in this calculation the examiner sorted the sales report above by Job number.  It was while reviewing the sorted sales journal that it became obvious that there was a problem.  Below is an extract of the sorted journal, with one of the more blatant examples of an invoice being created at the end of the month, credited the following week and then rebilled and credited again, again, again and again (and probably would have again)!

As can be seen above, $2.2MM-2.3MM was billed at three consecutive month ends only to be reversed the following week.  Eventually it was determined that the amount of the proposed work would be reduced to $1,084M.  This amount was then billed and credited/rebilled three additional times.  The audit went through 9/30/11, so the activity after 9/30/11 was not available but due to the large amount of the last invoice it was selected for testing in the invoice/shipping test and surprise, surprise the Company was not able to provide a signed contract or any other documentation to substantiate the amount invoiced.

At the end of the day, it was determined that approximately 1/2 of the reported $24 million dollar AR balance  consisted of the fraudulent “memo” billings.

The last ECG heard about this account from the lender (about a year after the exam was performed) was that the account was still in the lender’s workout group.

The above case shines a bright light on some “rules of thumb” as well as some other truisms that are worth repeating and recapping.

“The fraud triangle was developed in the 1950s by Dr. Donald Cressey (Marks 2009). Dr. Cressey was “..a criminologist whose research focused on fraudsters” (Pavlo 2011). When Dr. Cressey developed the fraud triangle, he identified three elements that would explain why a person would commit a fraud (Boise State n.d). The three elements, which are implied to have an interrelationship between them, are opportunity, pressure/incentive, and rationalization/attitude (Turner, Mock and Srivastava 2003).” 1

Collateral examiners  can not perform an examination with blinders on.  Its important to know the current economic, market and industry dynamics to properly address risk issues and audit findings.  This is especially true when those conditions are unfavorable and the elements of the fraud triangle are all in force.

Finally, as an added bonus, please enjoy the video below.  The video is an episode of “American Greed” (after the “Monk” promo) and details the “WorldCom” fraud, one of the more infamous cases of corporate fraud.   Similar to the above, it was also a pretty simple fraud except this one understated expenses by capitalizing them on the balance sheet instead of recognizing them in the income statement.  Enjoy!

That’s it for now. Please feel free to leave a comment or question. If you would rather contact me directly you can email us at [email protected]

For samples of reports prepared by ECG please visit http://www.ecgcollateralservices.com/reports

This entry was posted in Uncategorized and tagged Billing Methods, Fraud, Percentage of Completion, Revenue Recognition. Bookmark the permalink.