Posted on March 22, 2014 | Comments Off on Credit Memo Lag and Dilution

Often examiners recommend adding a “Credit Memo Lag”  ineligible to a prospect or existing client’s borrowing base.  It seems that just as often this recommendation is argued against by the borrower and/or the account manager.  Usually the argument goes something like “credits are the major component of dilution and as long as they are captured in dilution, then a reserve is not needed.”  Other times the recommendation is adjusted to reserve for only the lag up to the eligibility period (i.e. 90 days).  This post will discuss and illustrate why this is not a good idea.  We will also discuss some of the variations we’ve seen used to calculate this reserve and the merits of the various treatments.

There are basically two ways to measure credit memo lag:

Just as one man’s poison is another’s passion, the CM lag calculation employed is going to depend on the lender’s preference.   Often it is not possible to calculate the lag based on the original invoice date as the credit can not be traced to a specific invoice.  In these instances the lag should be based on the date the liability or the need for credit became a reality.

As a company conducts business, there will inevitably be issues with product quality, production times, billing amounts, and a host of other issues.  Any one of these areas can cause the need for a credit to be issued to a customer so that the amount billed can be reduced to the amount that will rightfully be paid.  When credit issuance is delayed the amount reflected in the accounts receivable is overstated by the amount of unissued credits.  Over time more and more credits will need to be issued.  The longer it takes a company to issue a credit, the greater the risk to the lender as the AR collateral will be increasingly overstated.

The Argument Against CM Lag Reserves

Argument #1: Credits are Part of Dilution, Therefore A Reserve is Not Needed

Because dilution often drives the advance rate, many lenders over look the need for a CM lag reserve.  The argument (which as we will see below is wrong) is that as long as credits are captured in dilution then there is no need for a lag reserve.  Since dilution is measured over time, usually a year, you still get a full year’s worth of credits divided by a full years worth of sales.  It doesn’t matter that it takes a company excess time to issue a credit, so long as dilution is measured with similar periods of sales and credits (i.e. 12 months of credits divided by 12 months of sales).  This way, even though you may not be capturing the credits that still need to be issued in this period, you are capturing credits from the prior period which offset the missing items.  In other words, credits that are issued in the first month of a 12 month period are probably due to sales that occurred during the prior 12 month period.  These credits offset the impact of the credits not issued due to CM lag.

The argument can be extended to…. “if you include a CM lag you are double counting/dipping  because you are hitting the Company twice, once with dilution and again with the CM lag.”

Although credits are usually the major component of dilution, there are several reasons why this has little to do with whether or not a CM lag reserve should be implemented against the AR.  These include:

To illustrate the above, lets look at an example:

For simplicity’s sake lets assume that credits are issued against specific invoices.  In addition, it is the lender’s policy to reserve for CM lag in excess of 30 days.  Now lets assume that we have a client that is a start-up company with only 12 months of history.  Lets also assume that it takes the company  120 days from the invoice date to issue a credit and that 15% of sales are not collected; 10% are credited and 5% continues to age out and remains on the aging (to be eventually written off). the other 85% is collected the month following the sale.  Below are the AR statistics for this hypothetical company: 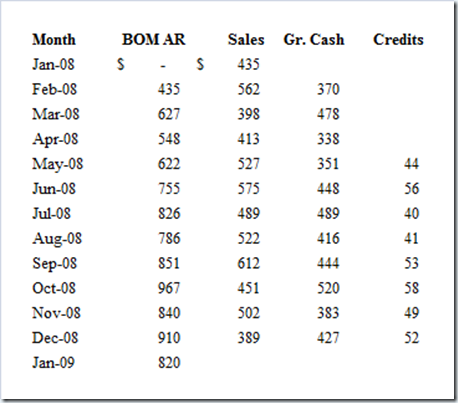 Again to keep things simple and to illustrate the point, lets assume that there is no “cushion” and that the advance rate is based solely on the dilution rate (1-the dilution rate = the advance rate).  Using the 12 month dilution rate, the advance rate would be 93.3%; however, because we want to be prudent and because we recognize that credits were not issued for the first five months of the year, the advance rate is adjusted to the six month dilution rate of 9.9%.  Therefore our advance rate is 90.1%.  The examiner wanting to make sure that the lender is secured from a collateral stance as well as a legal stance, recommends an ineligible for CM lag in excess of 30 days.  As we assumed and can be seen above, credits are issued approximately 120 days after the invoice.  Based on the last three months the average daily credits are $1.77 ($159 of credits issued from 10/1/08-12/31/8 divided by 90 days). The CM lag ineligible is calculated as $1.77 in average credits times 90 excess days = 159.

The account officer argues that the CM lag is not needed as the credits are included in dilution and that the it makes no difference as to the delay as the AR is constantly turning over.  It is his opinion, that as long as the dilution is based on 6 months then the dilution calculation accurately reflects the realizable percentage of the AR (90.9%).

Availability per the examiner and the account officer’s alternative calculations are shown below: 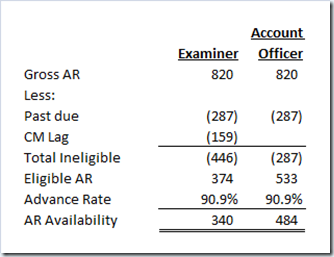 Based on the assumptions above, we know that we can expect to collect 85% of the December sales.  The gross sales for December were $389, so the amount that can be collected at this point in time is $331 ($389 * 85%).  As can be seem above, the examiner’s availability calculation is much closer to the realizable value of the AR than the alternative calculation of $484M.

The lender is in a much more secured position by taking the CM lag reserve as determined by the examiner then it would be if it relied on dilution alone.

Argument #2 – The CM Lag is Needed But Only Up to the Eligibility Period.

This argument makes the case that because AR that is aged over a certain point in time is considered ineligible, that the CM lag is needed only up to that point in time.  Any reserve should be “capped” at the eligibility period as the sales that those credits originated from, if open, are now aged in the past due column.

Although there is certainly merit in the point that the originating sale, if open is now past due, the problem is that the credit may or may not be taken against the original sale.  Often items are returned or problems uncovered, well after the invoice has been paid.  In addition, it is often not possible to identify the invoice that the credit originated from. Regardless, it is at the customer’s option as to how it will utilize the CM.  There is no guarantee that just because a credit originated from a sale that occurred six months ago,  that that is the invoice the credit will be applied to.  In fact it is quite common for credits to be taken on subsequent payments of invoices issued well after the original problem invoice.  One has to look no further than “past due credits” on the borrowing base to see that that credits often go unapplied.  Normally past due credits occur because the customer has not yet decided how to use the credit.

Every lender has its preferences as to how and if CM lag should be reserved for.  However, there are several basic methodologies that are typically employed.

We have seen the following methods to measure lag days while performing field examinations for various lenders:

As mentioned in several prior posts, I find it fairly disappointing that for the most part field examiners continue to use methods that were originated in the days when auditors used pencils and analysis pads and not spreadsheets and data bases.  One area that this is glaringly obvious is the use of averages.  For my money, when calculating lags, weighted averages should be used as opposed to straight averages.

Weighted averages are determined by weighting the items reviewed by their value.  For CM lag this involves multiplying the CM dollar amount by the lag days.  This is done for each item then the weights are added together and divided by the total value of all the credits.

The reason for using weighted averages is that it does a much better job of measuring the risk associated with lag.  For CM lag, there is much more risk when high value credits are delayed in being issued as the AR is overstated until the credit is processed.  Lower valued credits have less risk as they have less of an impact on the AR.

By the same token if the lag days were reversed with the large $9,100 credit having a 9 day lag and the others having a 95 day lag, the “straight” average would result in a lag calculation of 86.4 days, where as the weighted average would be reduced to 16,7 days.

How Much Lag Should Be Allowed?

It is our belief at ECG, that the amount of lag days allowed should be determined on a case by case basis and in some instances credit by credit basis.  The method used to measure lag (invoice date vs. liability date) should be considered as well as the reason for the credit and the processes involved.

If invoice dates are used to measure the CM lag, then it makes sense to have a higher allowable number of days then if the liability date is used.  By the same token, it should be easier to issue a credit for a billing error then it is for a return.  Depending on the industry, returns can take days or weeks to be assessed.  A Metallurgy company that needs to have returns assayed or tested is going to take longer to process credits then a distributer of watches.

Hopefully the above illustrates why we feel that CM lag ineligibles are important and should be incorporated into a Client’s borrowing base whenever there is excess lag.   The methodology employed should be dependent on the situation.  The field examiner should be able to determine the appropriate method to use and also be able to construct a reasonable reserve based on all the factors surrounding credit memo issuance.

Thank you for taking the time to read this……. please leave a comment and let us know if you agree or disagree with any of the above. and remember……

This entry was posted in Uncategorized and tagged Accounts Receivable, Credits, Dilution. Bookmark the permalink.